Recreating the Big Band era, Rat Pack Reloaded perform a dazzling show, with their reporter consisting of classics including ‘New York New York’, ‘My Way’, ‘Feeling Good’, ‘It Had Better Be Tonight’, ‘Sway’, ‘That’s Amore’ and ‘Fly Me to the Moon’.

With three of the music industry’s biggest personalities, Rat Pack Reloaded features stars in music theatre, television and film from across the globe.

With the ability to play with recorded backing tracks, or as a live band, Rat Pack Reloaded offers something for event.

Accessible, entertaining and versatile, Rat Pack Reloaded connect with any audience, regardless of background, age or music preferences. 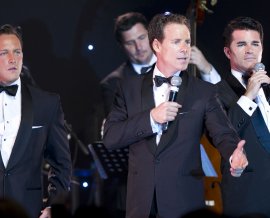