A breath of Fresh Air

Kiyomi Vella is a talented and creative musician that cast her spell on The Voice Australia 2013. She introduced herself to the screen with her own rendition of 1234 in the nail biting Blind Auditions. With flowers in her hair she sang to the backs of music legends: Delta Goodrem, Seal, Joel Madden, Ricky Martin, turning chairs of Joel Madden and Seal.

Her incredible journey with Joel Madden began as she became Team Joel for life. Her individuality intrigued viewers in every live show as she performed on the big stage: 1234, Human, Upside Down, Oh So Quiet, Young Blood, Pack up, Running Up That Hill, all were highlights in the top rating show.

After an incredible experience, Kiyomi Vella made it through to the top two of Team Joel.

Australian Born with a Maltese and Japanese Background, Kiyomi has been persuing her unique musical path since she was thirteen, singing and song writing. Her EP Good Out Of Fine is currently out on iTunes: released 2012.

Kiyomi has moved on to new and exciting things for the future, exploring the creative world of fashion and modelling, while continuing to develope her first love, music. 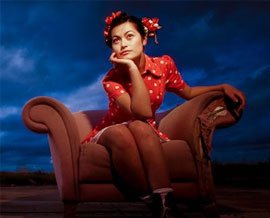