Boasting an action-packed comedy magic show and an awe-inspiring Las Vegas show, Brendan Mon Tanner provides an array of entertainment options to suit any event. As an extreme comic magician, Brendan’s repertoire is extensive as he sets out to entertain audiences across the globe.

Brendan has been featured across the media, including on ‘Good Morning Australia’, ‘The Footy Show’, ‘Midday Show’, ‘The MTV Awards’ as well as many other programs.

His entertainment has earnt him nominations and awards galore, from Best Specialty Act, to Best Production Show, Brendan is the ultimate professional.

With over 25 years’ experience in the industry, Brendan understands what audiences expect. He is also able to tailor his performances to suit any event and audience. He aims to wow, entertain and amaze his audiences, creating a high-energy atmosphere that will leave delegates buzzing. 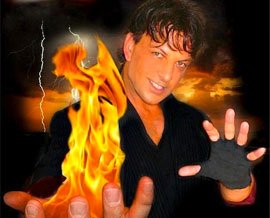