Cool mix of Jazz and Groove

Mac is a graduate of the prestigious National Institute of Dramatic Art (NIDA) and has established a successful acting, singing and coaching career both here in Australia and OS. She has been nominated for some of the country’s top Theatre & Writing Awards and was approached by Freemantle Media to be part of the 2014 X-factor series.

When not rocking out with The Mac Project, Grammy and ARIA award-winning Lucas plays bass for good friend and international superstar Gotye, and has recorded and toured all over the world.

Nick K (drums/percussion & vocals) has played with some of the biggest Aussie names in the business and can currently be seen performing as Mick’s (Eddie Perfect)’s drummer in the hit TV series Offspring. Nick also performed at Daniel Johns and Natalie Imbruglia’s secret Port Douglas wedding.

Mikey Chan (Chan-man) has long been recognised as one of the country’s top funk guitarists and has recorded with artists such as Kimbra, Roosts & M-Phazes on their award-winning albums. He also performed on Pharoahe Monch’s album W.A.R. alongside Grammy Award-winning artist Jill Scott. 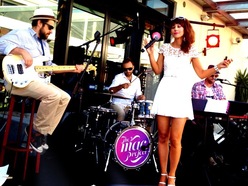