With a rich, velvety voice and fantastic vocal range

If you happen upon one of her performances you feel drawn in. She moves with ease from pop to jazz, blues to r&b, disco to Latin. You name it, she does it! Everything from The Beatles to Beyoncé, Ella Fitzgerald to Elvis Presley, Michael Jackson to Michael Bublé!

Having worked with some of Australia's finest entertainers such as Peter Cupples (Stylus), Ross Wilson (Daddy Cool/Mondo Rock), Lisa Edwards (John Farnham) and others, Sarah has also had extensive experience as a session/back-up vocalist.

From 1997 she was a regular guest artist on Bert Newton's Good Morning Australia, clocking up around eighty performances on the popular morning program until the show ended in 2006.

As well as GMA, other television appearances have included the popular variety show "Hey Hey it's Saturday" (2 performances with Cupples); Denise Drysdale's "Denise" morning programme (regular appearances); The Good Friday Appeal for the 7 network (featured performance during the telecast); the AFL's Brownlow Medal, and she has featured in a number of commercials.

Events have included The 2006 Commonwealth Games Premiers Dinner (in 2003), The Melbourne International Jazz Festival, The Stonnington Jazz Festival, dinners for the AFL, The Melbourne Music Festival, appearances at The Australian Formula One Grand Prix, many performances for the AFL's night of nights - The Brownlow Medal, the Ford Australia Annual Awards dinner hosted by Craig Lowndes, Sony product launches at The Marriott Hotel,Qld, and more. 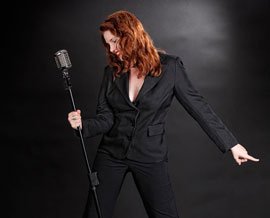