Playing some of the greatest songs across the decades, Hit Machine aim to get everyone on their feet and singing and dancing.

The talented musicians and singers play the most popular and requested songs from the 70’s, 80’s, 90’s and 2000’s to produce a set list that every audience will enjoy.

The band has also launched the 80’s and 90’s machine which is a fully costumed set of both the decades, adding fun and laughter into any event. 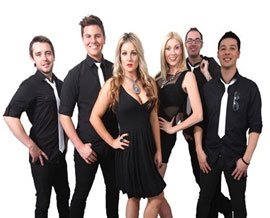