Delivering a stunning show designed specifically for your special event

Hardware Lane is a cover band who enjoys creating an emotional response to their music. They are a group of professional and passionate musicians who breathe new life into songs from the past five decades.

When accomplished soul singer Adam Kleist united with keyboardist Giselle Masaganda and guitarist Tim Plunkett a light-bulb moment arose, and using their combined skills they formed a cover band that is known for evoking a response from their audiences, whether it is dancing, singing or emotional.

Adam has performed regularly in cover bands in both Melbourne and Canberra as well as collaborated with local dance producers to record soon to be released songs. Giselle holds over twenty years’ experience playing keyboard and piano and has worked with and recorded with successful urban and hip-hop producers. Tim has performed with local bands in some of Melbourne’s great music venues.

Hardware Lane gets its inspirations from R&B greats including Sade, Stevie Wonder and Seal. Holding a repertoire of over 100 songs, they can entertain any audience regardless of age, background or musical taste. They deliver an amazing show to suit any event. 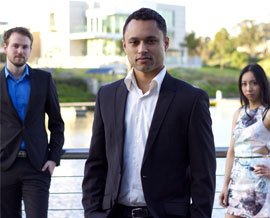