Uncle Nath is a totally clean comedian so he is perfect for events with all ages. Nath has been polishing his razor sharp hour for years and he has played in pubs, clubs and churches.

Nath has performed in front of hundreds of people at large conferences all around Australia. He has performed at the ‘Melbourne Comedy Festival’ and for the international charity ‘Compassion’.

Uncle Nath performed at our church ‘Men’s Conference’. He had the guys laughing from the start. They enjoyed his anecdotes, all of which were delivered in a humble, almost self-effacing persona. The amazing bit, he was funny without profanity. All without victimising his audience members. Thanks Uncle Nath.

We had Uncle Nath at our church fundraiser - it was a really great night - heaps of laughs, kept us all entertained. Nath was also great to work with, in coordinating the event with us. Definitely recommend him to work with, and as a great comedy act! 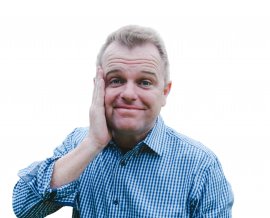