Steph Tisdell is one of the brightest stars in Australian comedy.

Her natural warmth and wit has been a hit with audiences and critics alike ever since she won the 2014 Deadly Funny National Grand Final. Her award-winning shows always sell out and she’s a regular on mainstream television shows such as Hughesy We Have A Problem and The Project.

She’s performed stand-up on Channel 10’s Stand Up for Christchurch Benefit; ABC TV’s Tonightly with Tom Ballard and Comedy Up Late, and on radio she’s performed for Triple J and is a regular on ABC radio guest programs. She co-hosted Triple J Breakfast for NAIDOC week 2019 with David Woodhead and has just wrapped filming her supporting role in her first feature film “Love You Like That”. Her 2019 spot on ABC TV’s Oxfam Melbourne International Comedy Festival Gala went viral and the following year she was invited to host the Gala, one of the festival’s highest status gigs.

Her debut show, Identity Steft, won the weekly award for best emerging talent at the 2018 Adelaide Fringe and was nominated for Best Newcomer Award at the Melbourne International Comedy Festival. Her second show, The Pyramid, won the 2019 Melbourne International Comedy Festival John Pinder Award. “Like Hannah Gadsby, she clearly recognises that true vulnerability is a powerful place to excavate comedy material and her authenticity on stage is remarkable”, said The Adelaide Review of her 2020 show Baby Beryl, which also won a weekly comedy award at Perth Fringe World Festival.

As a proud Indigenous woman, Steph was also a part of the Aboriginal Comedy All Stars line-up, who sold out during their festival run at Edinburgh Fringe, before heading to London’s Soho Theatre. Major daily newspaper The Scotsman described her set as being “a phenomenal 20 minutes” and said “Steph Tisdell is a glorious powerhouse of First Nations Funny”.

An interest in politics and advocacy saw Steph first enrolling in law and this formidable intelligence and sense of social justice now permeates her material. As a Ydinji woman she loves to share her experiences and what her culture means to her, and hopes that her visibility will empower other Aboriginal artists to come forward and to showcase why they’re the funniest race in the world.

Steph’s material also covers the spectrum of life as a twenty-something: dating, body issues, mental health. She revels in oddball observations (have you ever considered what animals would look like with eyebrows?) and ribald remarks. Authentic, relatable, hilarious with a wit as sparkly as the mischievous glint in her eyes, Steph Tisdell is a joy to watch. 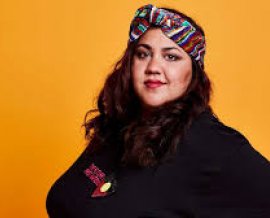