One of Australia's most experienced stand up comedians

Peter Rowsthorn’s presentations are entertaining, memorable and fast-paced, with his quick wit and strong character shining through. Combining his stand-up comedic experience with his MC professionalism, he is sure to be a memorable and engaging speaker at your event.

Understanding how events need to be flexible, he prides himself on being easy to work with and an organisers dream. Whether it be a casual lunch for clients or formal awards dinners, Peter is available for it all.

Best known as Brett on ABC TV’s ‘Kath and Kim’, Peter’s role in the beloved Australian show saw him become a household name.

From 1983 when he appeared as one half of the Cactus Brothers, Peter’s career in the comedy field flourished. He then moved into The Comedy Company working as a stand-up comic, writer and performer. He also made several appearances on shows like ‘Hey, Hey It’s Saturday’, ‘Midday with Ray Martin’, ‘The Big Gig’, ‘Tonight Live’, ‘Australian Comedians in Concert’, ‘Denton’, ÍMT’, ‘Something Hot Before Bed’, ‘Let the Blood Run Free’, ‘Thank God You’re Here’, ‘Can We Help? and ‘Recovery’. Peter starred in the 2018 season of 'I'm a Celebrity… Get Me Out of Here'. His hilarious antics and comedic wit amused and delighted his camp mates and viewers.

As one of Australia’s most experienced stand up comedians, Peter Rowsthorn is sure to leave your guests feeling entertained and amused. He is the perfect addition to any event and can fill an assortment of roles including MC, host and performer.

For further information on Peter Rowsthorn please contact one of Keynote Entertainment’s consultants on 1300 661 904 or info@keynote.net.au and we will be happy to assist you or go to our comedians page for more ideas.

LIWA Aquatics was pleased to host Peter at our conference which provided us with an entertaining Dinner. Well prepared and organised and very easy to work with. Peter’s MC duties and comedian skit was well received by the crowd on the night. 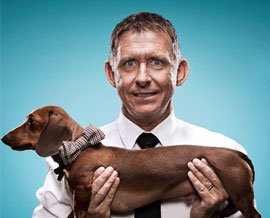