Combining honesty and observation to become a popular comedian

Nazeem Hussain is fast becoming one of Australia’s most loved comedians. His brutal honesty and humorous views on society have seen his popularity increase dramatically over the past few years.

After coming fourth on the 2017 Australian season of ‘I’m A Celebrity… Get Me Out Of Here’, Nazeem’s comedic abilities kept both the campmates and viewers across Australia entertained as he aimed to raise money and awareness for his chosen charity ‘inTouch’.   As a child of domestic violence and having spent time in and out of women’s refuge’s Nazeem holds the charity and its values close to his heart. Nazeem starred in Channel Seven's comedy sketch series 'Orange Is The New Brown'.

Best known for producing, creating and starring in his critically acclaimed television show ‘Legally Brown’, Nazeem pushed boundaries and brought light to issues many racial and religious issues present in Australian society, especially for Muslims. The show aired for two seasons in 2013 and 2014, and in 2015 it was nominated for Most Outstanding Comedy at the Logie Awards.

Prior to Legally Brown’s success, Hussain was also featured across Australian television networks including SBS, Ten and ABC, on multiple shows including Balls of Steel, Salam Café, The Full Brazilian, The Project, The Feed, ABC News Breakfast, Q and A and many more. More recently, Nazeem has been selected as a correspondent on Netflix’s upcoming program ‘Bill Nye Saves the World’ which is set for release in April 2017. He will star alongside Bill Nye, Karlie Kloss, Derek Muller and Emily Calandrelli in the science focussed show.

Nazeem has also performed at comedy festivals and galas across the globe including at the Melbourne International Comedy Festival, the Sydney Comedy Festival, Falls Festival and Southbound Festival. In 2011, he performed his show ‘Fear of a Brown Planet’ at the Edinburgh Fringe with fellow comedian Aamer Rahman. For his debut performance, the Guardian newspaper gave him the highest review in that year, complementing its attributes with the acknowledgement it deserved. In the same year ‘Fear of a Brown Planet’ was a focus of Australian Story with an emphasis on Aamer and Nazeem’s lives within Australia and their comedic performances in Europe.

2015 saw Nazeem’s solo stand up career begin, starting with a tour around Australia. His shows were named as one of the most successful to emerge from the Melbourne and Sydney International Comedy Festivals which led to a Helpman Award nomination for Comedy.  A year later, Hussain enjoyed even further achievement with sold-out shows across Australia, New Zealand and Europe. Nazeem performed once more at the Edinburgh Fringe, as a solo act, where he won over more audience members and persuaded some of the harshest critics.

In April 2016, he released his first podcast titled ‘Burn Your Passport’ which won iTunes Best Comedy Podcast of 2016. The podcast has also been ranked in the top 20 most listened to Podcasts in Australia and was among the first podcasts to be commissioned by ABC Radio.

Nazeem’s work as a comedian combined with his avid activism for social change has seen his work labelled intelligent, insightful and thought-provoking. 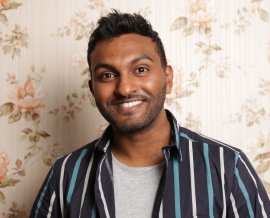