Writer, Actor and now Author, Magda Szubanski is an Australian television and comedic legend. An absolute screen talent when available Magda is also an undeniable favourite for corporate work.

Magda is an extraordinarily rare talent — somebody with first-rate emotional and comedic instincts as well as a fierce intellect.

The recent publication of her first book Reckoning announces the arrival of a fearless writer and natural storyteller.  Reckoning is a riveting, overwhelmingly poignant autobiography by a woman of genius.

Magda has produced a remarkable memoir, that weaves the tragedy of twentieth century history into a personal narrative of coming to terms with family and self, and manages to honour both stories. The writing is assured and controlled, the storytelling expert and thoughtful, the language eloquent and moving. The writing, the story, the voice—all of it is beautiful.    ‘A brave and tender book about everything that matters most in life.’

In 2015,  Magda Szubanski and Gina Riley reunited for new comedy show Open Slather.   It's a send-up of The Real Housewives of Melbourne star Gina Liano with Magda dropping by as Gina Rinehart – so many Ginas! They also take send up Hillary Clinton and Downton Abbey as it seems no one will be safe from their witty comedy.

"Doing this is fun on a stick. We’ve all gone off and done other things but there’s something about sketch comedy that’s just, well ... hilarious. Sketch comedy has a vibrancy and immediacy that no other form of comedy really has," Magda explained of the experience.

Internationally acclaimed for her role as Mrs Hoggett in the Academy Award and Golden Globe winning BABE and its sequel BABE: PIG IN THE CITY.  She also starred in the 2002 release THE CROCODILE HUNTER: COLLISION COURSE alongside Steve Irwin and appeared in the New Line sequel SON OF THE MASK.  She reteamed with the BABE team to voice the animated feature HAPPY FEET alongside Brittany Murphy and Robin Williams.

Magda has twice been named the Most Popular Person on Television (in the years 2003 and 2004) and she has been acknowledged with an extraordinary seven Logies, three Australian Writers’ Guild Awards, two People’s Choice Awards and an Australian Film Institute (AFI) Award for Best Actress.

Magda is probably most famous for the  ABC TV sitcom KATH & KIM, widely acknowledged to be the most successful comedy in Australian television history.   Magda created her KATH & KIM character Sharon Strzelecki in the 1995 sketch show BIG GIRL’S BLOUSE, which she co-wrote, co-produced and starred in with her KATH & KIM producers and co-stars Gina Riley and Jane Turner. The series was a cult hit and won critical acclaim. 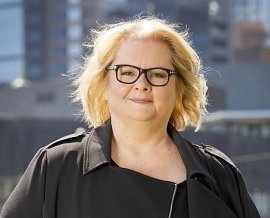