Sought after for MC roles and comedy spots at corporate events

Delighting fans with her inventive, skilful and engaging comedy, Claire Hooper is a well-known comedian and favourite amongst Australians. Known for her role as a Team Captain on Network TEN’s ‘Good News Week’, Claire has since appeared on ‘Rove Live’, ‘The Sideshow’, and ‘Stand Up! Australia’.

In 2004, Claire began her comedic careers after winning her state finals of triple j’s Raw Comedy. A year later, Claire was selected to perform in ‘The Comedy Zone’ at Melbourne International Comedy Festival, ultimately winning ‘Best and Fairest’ at the National Improv Championships.

Claire’s range of solo shows include ‘Storybook’, ‘Forget Your Troubles’, ‘C’mon Get Hoopsy’ and ‘One Small Thing’. 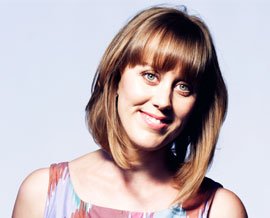