With over 200 character voices in his repertoire, Ben is Australia’s best impersonator. He is an incredible comedian, constantly sending audiences worldwide into hysterical fits of laughter with his spot-on impersonations.

At ten years old, Ben was a natural comedian, having discovered his talent for impersonating voices and using it to entertain his classmates. Since then, he has developed an impressive repertoire of over 200 character voices, including Dr Phil, Morgan Freeman, Tom Cruise, Robert DeNiro, Liam Neeson, Shrek, Homer Simpson and many more.

Ben has performed sellout shows in the Melbourne International Comedy Festival in 2000, 2001 and 2003, and a hugely successful show at The Palms at Crown in 2006. In 2007, he impersonated Dr Phil in “What were you thinking?” to a captivated crowd. He then followed up with a successful regional tour across Victoria. In 2008 and 2009, Ben performed in the highly successful “Ben Price Live” at Red Scooter and Tim Tam from Vietnam Live in 2010.

In 2011, Ben was a Grand Finalist on Australia’s Got Talent.

One of Australia’s comic success stories, Ben has performed all over the world. In 2013, Ben performed “Celebrities Got Talent” to a sellout audience, later becoming a successful DVD and CD of the same name. In 2015, he filmed his first comedy special, “Comfort with a Price”, in Los Angeles. And in 2018, Ben performed his comedy special, “Ben Price, Growing Up”, to a sellout crowd. Since then, he has taken his show to a worldwide audience, performing in Los Angeles, New York, Vegas, Canada and more.

Ben’s many character voices have also been used for several radio campaigns, namely on Gold 104.3 as part of the Grubby and DD Breakfast Show for ten years and on the Kyle and Jackie O Show. He has also made numerous appearances on television, including Channel Nine’s “A Current Affair” as Dr Phil, The Comedy Channel on Foxtel, and Channel Ten’s “The Panel Christmas Wrap” as Ian Thorpe. Ben has featured in four movies, including Audacity (2015), At Least Once (2017), Christmas Gone Viral (2017) and played three characters in the 2019 3D animated feature, The Pilgrims Progress.

With over two decades’ worth of experience under his belt, Ben is a versatile talent who can incorporate his many characters into a routine while serving as your MC. His material is clean and can adapt to any organisation or event. With his vast experience and incredible repertoire, Ben will captivate and entertain any audience as Australia’s Best Impersonator.

We had the pleasure of having Ben Price at a recent Townhall. He was amazing and nothing short of hilarious. He joined as President Trump to kick things off and roasted the leadership team , followed by a very funny Q&A. Ben then broke out into a whole raft of characters including Arnold Schwarzenegger, Owen Wilson, De Niro, Homer Simpson, Shrek and Liam Neeson. He does over 200 impersonations! One of the most talented people on planet earth, a great guy, and highly recommend working with him. 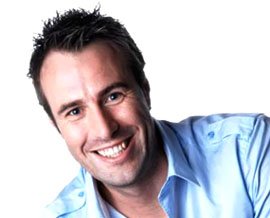