Scott Picket is an award-winning Chef, author and television presenter with an enviable reputation. Scott reflects the essence of Australian hospitality, and his generosity of spirit, values and craft are honoured in his restaurants Estelle,  Matilda 159, Lupo, Pastore and Pickett’s Deli & Rotisserie.

Scott’s love for great produce began early. As a kid growing up on his family’s farm in Kangarilla, South Australia, he learnt about food and seasonality, and developed a deep respect for farmers and growers.

Perhaps it was that subliminal connection with his environment that influenced Scott, or perhaps it was growing up surrounded by family and the traditions of his grandparents cooking. Whatever the reason, those years set the foundations of Scott’s values as a chef and restaurateur– always putting food at the front and cooking with the greatest respect for the produce.

Scott’s talent was recognised early in his career and he was awarded gold and title of “The One to Watch” at Salon Culinaire. His kitchen education and training proved to be disciplined and traditional. This respect for the classics and understanding of seasonality drew Scott to Europe, where he honed his skills in some of the most rigorous Michelin starred kitchens of London in the late 90s. In particular, Scott worked under the tutelage of chef Philip Howard at The Square in Mayfair and he remained with Howard for three years.

Returning to Australia in 2004, Scott settled into Melbourne’s growing restaurant scene where he spent six years as one of the city’s pre-eminent head chefs, achieving awards and accolades for his work. In 2005 he was selected to return to Europe to represent Australia at the prestigious Bocuse d’Or, where he achieved the highest Australian ranking at that point.

In 2011, Scott opened his first restaurant Estelle Bar Kitchen, in Melbourne’s north. The restaurant received great critical acclaim was awarded one chef’s hat in The Age Good Food Guide. Estelle Bar Kitchen grew in popularity, and Scott also acquired an adjacent property, splitting the business in two in 2015 to create Estelle Bistro and ESP (Estelle by Scott Pickett). This unique set-up allowed Scott to demonstrate the diversity of his skills, from informal bistro to elegant fine dining. Each location demonstrated the core values of Scott’s cooking identity: a warm-hearted, produce-loving, country boy with an obsessive dedication to excellence.

Scott closed ESP in 2018 to re-inven this offering as the Estelle, which offers a contemporary Australian dining experience with light snacks and share plates as well as more substantial offerings in the main dining room.

Scott opened Saint Crispin in Collingwood from 2013-19. The restaurant opened to immediate acclaim, with the Age Good Food Guide awarding two chefs hats in its first year. Pickett’s Deli & Rotisserie followed in 2016. Located in the iconic Queen Victoria Market, the deli showcases an approachable menu that’s all about good food without fuss.

In 2018, Scott openedMatilda 159Domain in South Yarra. Named after his daughter, Matilda, it is a visual and sensory journey, and a true labour of love for Scott. The kitchen is fuelled by open fire and hot coals, delivering great food, strong design and a feeling of comfort and warmth.

Scott is a published author and in 2014 he released his part autobiography-part cookbook‘A Cook’s Story’. The book offers insights into the workings of some of the most impressive and demanding kitchens in the world and tells the story of Scott’s own journey to become a lauded Chef. His second book, A Marriage of Flavours was released by Penguin in 2019.

Scott is also an experienced television personality and in 2015, he worked alongside renowned UK author, food writer and journalist Tom Parker Bowles as co-host on the Channel 9 reality cooking series Hotplate. 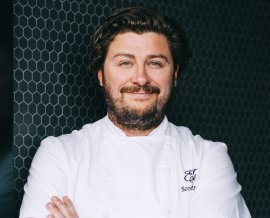