First class chef with a big Italian heart and soul

Born in Tasmania and raised in Naples, Massimo watched his grandmother, aunties and mother cook and prepare food in the kitchen every day. He believes the thing that makes Italian food amazing is simplicity and the freshest ingredients.

His career reads with a slew of awards and between 1999 and 2005 he won everything from Apprentice of the Year, to a Chef’s Hat and the People’s Choice Awards at the Lexus Young Chef of the Year Competition.

Hungry for more knowledge, Massimo took off around the world, moving back to Italy’s south to master his craft while travelling including to the US where he managed a large team of chefs for the G’Day USA gala event which catered for 800 VIPs from around the world.

On his return to Australia, Massimo’s ethos of Tutti A Tavola (everyone to the table) was brought to life when he hosted his own pop up by the same name, collaborating with local producers and celebrating the art of true Italian feasting, where good food is made with fresh seasonal ingredients, cooked simply and with little fuss.

After 20 years cooking in some of the country’s busiest, best kitchens and alongside the famed chefs who have owned them, Massimo continues to build on his success through his business Food by Massimo, hosting street feasts and guest appearances at specialty dinners across Australia as well as running cooking demonstrations and producer dinners in his native Tasmania.

Just like his cooking, in life he is full of spirit and adventure, excelling in his true passion, Italian street food shared with friends and diners, creatively, simply and superbly in a social and uncomplicated way.

His TV appearances include Foxtel’s Imagine This, Ready Steady Cook, Yes Chef, Morning’s Battle of the Chef’s and he is a regular at food and wine shows 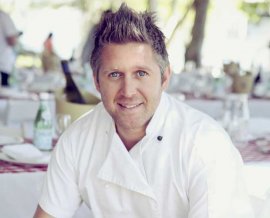