'The Queen of Chocolate’, an internationally respected pastry chef and chocolatier

Kirsten Tibballs, proclaimed by MasterChef Australia as ‘the Queen of Chocolate’, is one of Australia’s most celebrated and internationally respected pastry chefs and chocolatiers. As the sole ambassador in Australia for leading chocolate manufacturer, Callebaut, Kirsten regularly travels throughout the world demonstrating her craft in chocolate and patisserie.

Kirsten has represented Australia at the World Pastry Team Championshipsin Las Vegas, USA, where she was recognised as the best in the world for her handmade chocolates. Kirsten has also won a Gold and Bronze medal for her patisserie and chocolate artistry in the Pastry Olympicsin Germany.  As a testament to her skills, Kirsten was given the honour of judging the World Chocolate Mastersin Paris, The Patisserie Grand Prixin Japan and The World Chocolate Mastersselections in London.

Kirsten’s talents extend beyond the kitchen and her first self-published cookbook, Chocolate to Savour,won the award for Best Photography from Gourmand (UK). Kirsten is also the author of a second cookbook, ‘Chocolate’; as a tribute to her hero ingredient.

Kirsten makes regular television appearances, including Everyday Gourmet with Justine Schofield, and has presented numerous chocolate challenges on MasterChef Australiato test and inspire the contestants. She presented the final challenge in the 2017 MasterChef Australia Grand Finale, which was accredited the longest challenge in the show’s history. Kirsten is also in the process of filming her own TV show, the Chocolate Queen, which is due to hit screens in 2019.

With a desire to pass on her knowledge to other passionate food lovers and professional pastry chefs, Kirsten established Savour Chocolate & Patisserie School in 2002 in Brunswick, Melbourne. Savour creates an opportunity for students to learn from and work alongside their award-winning chefs. It boasts a state of the art kitchen and hosts a number of renowned international pastry chefs each year.

Savour was the first school in Australia solely dedicated to teaching the art of chocolate and patisserie, with many of the school’s alumni starting their own boutique chocolate shops and patisseries around the world.

In 2017, Kirsten launched her first app ‘Mix n’ Make’which allows users to hone in on their chocolate and patisserie skills by creating their very own eclairs, macarons and tarts from the ease of their device. Kirsten spent months researching and developing an array of unique flavour combinations so users can generate the recipe and bring the creation to life in their own kitchen.

When Barry Callebaut shocked the world with the introduction of a fourth type of chocolate in May 2018, Ruby RB1, Kirsten was chosen to officially launch the product in London. This has been one of the major breakthroughs in the chocolate industry in over 70 years. 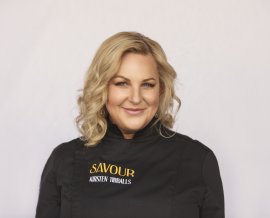