As an award-winning chef, restaurateur, author and television presenter, Karen Martini is a widely known food personality. She draws her passion for food from her Tunisian-Italian heritage and from the challenges of feeding nutritious and stimulating food to her young family.

Karen was the founding chef at the critically acclaimed Melbourne Wine Room and Sydney’s Icebergs Dining Room and Bar. As executive chef of both restaurants, she held two chef’s hats in Sydney and Melbourne, and won, with Icebergs, the 2004 Best New Restaurant Award from The Sydney Morning Herald. After 15 years at The Melbourne Wine Room, Karen and her partner Michael Sapountsis sold in 2011 to pursue new projects. Karen and Michael still  own and run St Kilda’s much-loved pizzeria mr. wolf, which they launched in 2004.

Karen was the food editor for The Age’s Sunday Life Magazine for six years, and the food editor for The Age’sEpicure/Good Living lift-out for five years. She has contributed several articles to The Australian, and is the author of the cookbooks, 'Salads & Vegetables', 'New Kitchen', 'Home', 'Everyday', 'The Karen Martini Collection', 'Feasting', 'Cooking at Home' and 'Where the Heart Is'. Karen is currently working on a major book project with Hardie Grant, which is due for release in 2020.

For over a decade, Karen  has  been  the  resident  chef on Australia’s longest running lifestyle television series, 'Better Homes and Gardens'. She is also a regular judge on Seven’s 'My Kitchen Rules', and is the co-host of 'The Intolerant Cooks'.

Over the years, Karen has cooked for many charity functions, as well as demonstrating and presenting at events and festivals. She has been a key presenter at The Melbourne Food & Wine Festival and presented again in 2013. Karen was a Showcase Presenter at the 2012 Sydney International Food Festival, and anchored a successful live auditorium show based on My Kitchen Rules. Karen is a crowd favourite at the 'Better Homes and Gardens LIVE' shows, taking the audience through her popular television recipes in real time.

Karen is the Food Ambassador for Aurrum, one of Australia’s leading residential aged-care providers, designing menus, responding to feedback from residents and training the in-house chefs. She is now also Chef Ambassador for the house venues at the Sydney Opera House, joining Peter Gilmore and Matt Moran as residents in Sydney. 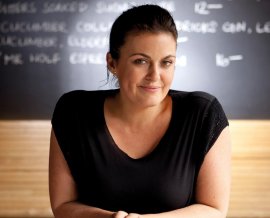