Julie Goodwin is Australia’s favourite home-cook after taking home the title of ‘MasterChef’ in 2009. Since then, she has released cookbooks, appeared on television and at food events and written recipe columns, all whilst raising a family.

In 2009, over four million Australians tuned in to watch the finale of the first season of ‘MasterChef’, which Julie won. Audiences relished her honest and humorous personality as well as her humble cooking style, and the judges enjoyed her food as much as Julie enjoyed cooking it.

When Goodwin published her first cookbook ‘Our Family Table’, it reached number one on the book charts and remained there for over ten weeks.

Joining ‘MasterChef All Stars’ in 2012, Julie put on her MasterChef apron in the hope to raise money for charity. She ended up taking $15,000 to Oxfam as a result.

Five years on from her win, Julie opened a cooking school on the Central Coast of New South Wales named ‘Julie’s Place’. In the same year she also released her fourth cookbook titled ‘20/20 Meals’, which demonstrates how with just $20 and 20 minutes a family of four can be fed.

From a mum to MasterChef, Julie has become a household name and continues to release cookbooks and make frequent media appearances. 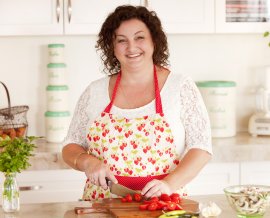