Son of legendary surfboard designer, Bob McTavish, Jesse grew up with a love of surfing, fishing and a deep respect for the ocean. There was something about cooking and ingredients that intrigued Jesse from an early age, and he has worked for some of the most renowned restaurants and cafes in Australia.

Jesse started his apprenticeship as a 15 year-old at the iconic Beach Hotel in Byron Bay where he honed his skills before moving to Sydney in 2000. Jesse drew technique and knowledge from talented chefs that crossed his path, and with that knowledge and love for ingredients, he moved back to South East Queensland and opened his first business, a delicatessen.

It was after sourcing and selling incredible ingredients that he saw a gap in the market: making the produce usually only found in fine dining restaurants accessible to everyone. After a few years developing this ethos and forming amazing relationships with farmers and suppliers, Jesse set out to find the platform that would launch this idea.

Top Paddock was that platform. Setting a new standard for food and design, it won the Eat Drink Design Award for Best Café Fit Out in Australia (2014), The Age Newspaper Best New Café (2013) and The Age Newspaper Café of the Year (2014). Jesse became the Executive Chef of the group and partner in the mid 2015 venture, The Kettle Black. The cafe went on to win numerous awards for both design and its culinary offering.

Most recently, Jesse was the Owner and Head Chef of the iconic Dunes Palm Beach and Head Chef at North Bondi Fish where he delivered fresh, creative and contemporary menus. 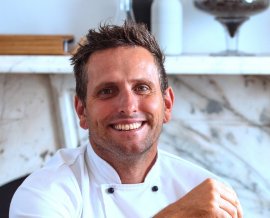