An honest speaker, who used cooking to change his life

As an award-winning chef and motivational speaker, Jeff Henderson mesmerises audiences with his impeccable honesty and compassion. He tells his story of how he turned his life around and encourages audiences to do the same.

After ending up in jail due to drug dealing charges, Jeff discovered that it was the fuel needed to change his life. It gave him the motivation to do what he was good at and enjoyed, which was cooking. Combining passion and his natural gift for cooking, Jeff and his story gained public attention.

Jeff has since released several books and cookbooks, including his memoir ‘Cooked: My Journey from the Streets to the Stove’ and ‘If You Can See It, You Can Be It’.

Within the media, Jeff was a creator of Food Network’s documentary reality program ‘The Chef Jeff Project’ and hosts ‘Family Style with Chef Jeff’.

As one of the most influential African American chefs, Jeff inspires audiences to achieve their dreams and gain success. He educates audiences across the world on how to thrive in today’s economy and how to transfer skills, making them applicable in any situation. 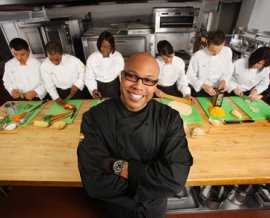