International Celebrity Chef and co-host of 'The Chew'

Internationally recognised chef, cookbook author and charity supporter, Jason Roberts has an incredible passion for healthy food. Having grown up in New Zealand with a household of food experts it was inevitable that Jason would develop a love for food.

He started his foodie career by spending seven years as a government chef in Australia and in 2005 hosted the award winning television program ‘Jason Roberts’ Taste’ on the PAX TV Network. He has also been regularly featured on ‘The Chew’ and ‘Fresh’.

Roberts is a strong believer in the idea that meal times create connections within families and that a gluten-free lifestyle is just as delicious as eating gluten. As a reflection of his beliefs he has authored three cookbooks including ‘Elements’, ‘Graze; A Whole Lot of Little Ingredients Quick’ and ‘Good Food – Fast!’.

As well as cooking full-time, Jason also makes time for supporting charities and works hard to ensure that every child in both Australia and America has access to good, wholesome and nutritious meals.

Jason is an avid speaker who enjoys educating audiences about the benefits of gluten-free living and how to live a healthy lifestyle. 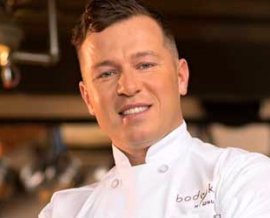