A French chef with an international reputation

Gabriel Gate is a French Chef with an international reputation. He holds a strong passion for all things food, sharing his expansive knowledge through television, cookbooks and teaching.

Born in France, Gabriel developed a love for food at a young age. His father grew fruits and vegetables and made wine from the small family vineyard and his mother and grandmother passed down their love for cooking.

As a young chef, he served his apprenticeship with Albert Augereau who was renowned in the Loire Valley as the best chef in the region. He had the chance to learn skills and develop his passion, working at two Three Michelin Star restaurants in France.

In 1977, Gabriel moved to Australia with his wife Angie.

Gabriel’s cooking knowledge has been shared across multiple television programs including Fun in the Kitchen, The Good Food Show, What’s Cooking, Taste Le Tour, Everybody and Body and Soul.

He has also shared his food wisdom via cookbooks, of which he has authored over 20, with several winning a variety of awards. Sales of his cookbooks has exceeding one million, making Gabriel the highest-selling Australian male cookery writer.

On July 14th, 2000, Gabriel was presented with one of France’s highest honours, La Croix de Chevalier dans L’Ordre du Merite Agricole, for his contribution in the promotion of French gastronomy.

Gabriel Gate has now established himself as having an influence over the ways Australian’s eat and cook and is in constant demand to demonstrate his skills as a chef and speaker. 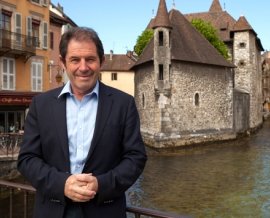