One of Melbourne's finest Chefs; a man who celebrates his French training, Australian lifestyle and South American heritage

Dan Szwarc was born and raised in Argentina – this is where he found his passion for food.

Dan’s food style is widely incorporative; he combines flavours and influences from his French training, his Australian lifestyle and his South American heritage – talk about a melting pot!

The highly talented chef began his training as a chef at the prestigious Bue Trainers in Buenos Aires, graduating at the top of his class. He soon started professional work, gaining experience at the Hyatt, Claridges and Gate Gourmet.  Dan then moved to London to work under Soufflé maestro Peter Kromberg at the Intercontinental Hotel, further widening his skillset; this was followed by a brief stint working on cruise ships, which eventually led him to Melbourne’s Sofitel, where he worked under the multi-award-winning Marcus Moore.

Dan’s career really started to take off at Crown Casino when he was appointed head chef at Number 8 Restaurant. He soon, alongside Phillipe Aubron, opened Les Boucheries Parisiennes – one of Melbourne’s favourite French restaurants. But, Dan didn’t stop there; next he was running Joseph Vargetto’s Oyster Little Bourke, The Albert Park Hotel and Livebait, before then becoming Head Chef at Gary Mehigan’s Fenix Restaurant. To top it all off, Dan then established the highly popular, but short-lived Hellenic Republic in Brunswick and the Hellenic Hotel in Williamstown.

Out of the ashes of The Hellenic Republic emerged Dan’s Empanada Bar, a more fun and relaxed concept, located in North Melbourne – The embodiment of what Dan is all about. There, he celebrates Argentinian flavours and combines them with locally sourced, Australian produce.

Dan has been extremely well-versed in what makes food wonderful for most of his life; his resumé is home to a long list of the world’s best chefs and best restaurants – his experience is a testament to not only his skill, but also his good character. A true maestro, Dan is an outstanding creator and speaker. 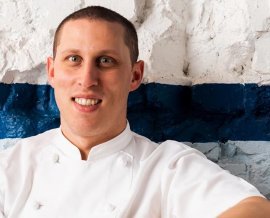