An award-winning pastry chef, cookbook author and television personality, Anna Polyviou has travelled all over the globe from creating jaw-dropping sweets and pastry creations in luxury hotels, on television and for top brands.

Anna first started her culinary career in 2001 as an apprentice with The Sofitel Hotel in Melbourne, where she won the “Best Apprentice in Victoria” competition run by Les Toques Blanc. She received a scholarship to work anywhere in the world as an award.

During her career, Anna has secured a degree in Culinary Arts in International Pastry from Thames Valley University in London and has trained with pastry chef icons, such as Kirsten Tibballs, Jean-Marie Auboine and Jerome Landrieu.

Anna honed her talents in the world’s best kitchens, including the Claridge’s Hotel in London. She worked for three years under Julie Sharp, UK’s best Pastry Chef in 2004, and Nick Paterson, UK’s best Pastry Chef in 2008. Anna gained global notoriety, winning numerous awards including being awarded best dessert in the UK, Australia’s Hotel Chef of the Year and Pastry Chef of the Year. She also took the top honours with the Nadell Trophy (Dessert of the Year) and the Culinary Academy Award of Excellence for pastry.

Polyviou is also the chairman and one of the Sydney Pastry Chef Club founders, an industry-learning program for executive pastry chefs launched in 2011.

In 2014, Anna hosted one of Australia’s first dessert festivals, ‘Sweet Street’. She worked with other prominent pastry chefs (including Adriano Zumbo, Kirsten Tibballs and Tim Clark) to create over 5000 desserts. The festival was attended by 600 fans, a number that continues to grow today.

Anna won Best Dessert (2014) in Australia for one of her trademark dishes, a stunning modernist take on the traditional Carrot Cake, a dessert featured on MasterChef Australia. She was asked to return as a Guest Challenge Presenter for MasterChef Australia in 2015 and 2016, presenting her Anna’s Mess and Firecracker desserts to the stunned contestants.

In 2015, Anna was made the Smooth FM’s Chocolate Festival ambassador and helped launch the first Kit Kat Studio. She designed her own personalised Kit Kat bar and several special-edition bars. Anna also helped with the launch of the Audi TT and designed the cake for The Great Australian Bake-Off.

Anna has been featured in various cookbooks such as The Great Australian cookbook and The New Pâtissiers. In 2018, she launched her first cookbook, “Sweet Street”, which sold out within weeks. Her second book, “Kid’s Corner”, was released in November 2019.

Her crazy dessert challenges drew the attention of the Producers of Family Food Fight Australia, later appearing in 2017 and 2019 as a co-host alongside Matt Moran and Tom Parker Bowles.

Known for her quirky urban street style and approachable personality, Anna is a media favourite and regular presenter at Australia’s top food festivals and food events. She has worked with Kenwood as their ambassador, collaborated with Mattel on a Barbie “Junior Executive Chef” Campaign, presented a series of recipes for Expressi by Aldi Supermarkets, and featured in a social media campaign for Singapore Tourism.

Now the Creative Director of her own business, Anna lends her unmatched pastry genius to top brands in unique sweet collaborations that are always the centre of attention. 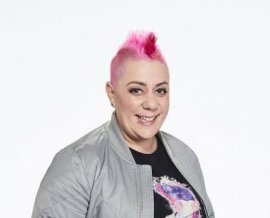