'The Sweet Assassin' is one of Australia’s most celebrated pâtissiers

As one of Australia’s most beloved pâtissiers, Adriano Zumbo is passionate about pushing dessert boundaries, not only in flavour but also presentation.

Beginning his sweet career at the age of 15, Adriano began his apprenticeship before his swiftly expanding business began in 2007.

After appearing in the first season of ‘MasterChef Australia’, Adriano introduced the contestants and audiences to the croquembouche and macarons, ultimately making him a household name.

Adriano continues to dominate the sweets scene, opening numerous ‘Zumbo’ stores and cafes across Australia, as well as releasing cookbooks and baking kits.

In 2012, Adriano joined forces with premium French chocolate brand Cacao Barry, where he was announced as their Australian Ambassador.

With unique and creative ideas, Adriano continuously evolves, with his energy keeping both himself and his fans wanting more. 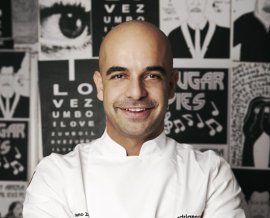