Use the freshest ingredients and keep it simple!

As owner and head chef at La Luna in North Carlton, Adrian Richardson is known for his clean, fresh and innovative food. Having coked in professional kitchens since 1999, Adrian is a well-known Australian chef.

Adrian is the author of 2 cookbooks, “MEAT” and “The Good Life”. “MEAT” has been nominated for the best designed cookbook at the Australian Publishers Association Design Awards as well as included in Melbourne’s Herald Sun “Best Books of 2008” feature.

In 2013, Adrian starred on Iron Chef America, leading a team of three Australian chefs through the competition.

Adrian has starred in a magnitude of television programs, including “Good Chef Bad Chef”, "Richo's Bar Snacks", “Secret Meat Business” and “Boys Weekend”, as well as been a guest judge on “Masterchef Australia” and MasterChef AllStars.

With a passion for Australian produce, Adrian inherited his passion for cooking from his Grandfather with a focus on using the freshest ingredients possible. 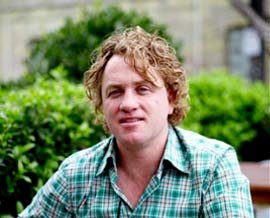