Best known for winning MasterChef Australia in 2010, Adam Liaw has elaborated on his culinary career with cookbooks, television programs and cooking presentations. Adam's win in MasterChef was the most watched non-sporting television event in Australian history.

Adam has authored five cookbooks, titled 'Adam Liaw's Asian Cookery School', 'Adam's Big Pot: Easy Meals for Your Family', 'Asian After Work: Simple Food for Everyday', 'Two Asian Kitchens' and his most recent one 'The Zen Kitchen'. He is also a regular columnist for Fairfax newspapers 'GoodFood', 'Sunday Life magazine' and 'The Guardian'.

He has a strong passion for all things cooking, especially fresh asian-inspired flavours. Adam's television program 'Destination Flavour' has seen him travel across the world and in 2016, it was awarded with the AACTA Award for Best Lifestyle Television Program.

In 2016, Adam was appointed by the Japanese government as an official 'Goodwill Ambassador of Japanese Cooking'. He is also UNICEF Australia's 'National Ambassador for Nutrition'.

With over 300,000 followers on social media, Adam's presence is one of the most influential within the Australian food industry.

Adam is an Australian food personality, and is passionate about educating everyone about the power of food. 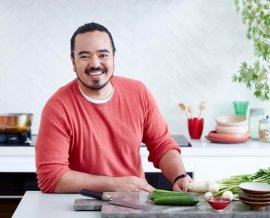