From the soap box to the big screen, Nicky Whelan is one Australian actress making big waves in Hollywood.

Starting her career on local shores, Nicky made a name for herself playing Pepper Steiger in the long-running Aussie soap opera Neighbours in 2006. Prior to this, Nicky also played the fictional celebrity “Chrissy Grant” in Russell Coight’s Celebrity Challenge, a spin-off of Russell Coight’s All-Aussie Adventures.

In addition to her budding acting career, Nicky also hosted a number of TV shows, including Coxy’s Big Break (Seven Network), Beyond the Boundary (Network 10) and Melbourne Woman (Seven Network), as well as several live events, including the night racing at Moonee Valley.

But of course, with talent like Nicky’s, it wasn’t long before Hollywood called—so, after a successful career in Australia, Nicky set her sights abroad and headed for the US. In the States, Nicky’s acting career flourished. Since her move, Nicky has featured in a number of US television shows, including The Lead of Matador, Entourage, Melrose Place, The League, Satisfaction, Mr. Robinson, Scrubs, Franklin and Bash. She also recently featured in Season 5 of SHOWTIME comedy House of Lies, alongside Hollywood stars Don Cheadle and Kristen Bell.

Nicky also found success on the big screen, featuring in several Hollywood films; in 2015, she worked on Terrence Malik’s experimental drama Knight of Cups, starring alongside Natalie Portman and Cate Blanchett. The following year, she also featured alongside Nicolas Cage and Willem Dafoe in crime thriller Dog Eat Dog, which was showcased at Cannes Film Festival. Currently Nicky is co-producing a movie with Nicolas Cage and Kali Hawk called Private Sessions, where she plays the lead female role alongside Cage.

Some of Nicky’s other films include The Wedding Ringer, Left Behind, Rebirth, Hall Pass— working opposite Christina Applegate and Owen Wilson—and Hollywood and Wine, working opposite David Spade. She’s recently starred in two new indie films in the US, called Love By Drowning and Do Not Be Deceived, as well as starring in Inconceivablealongside Nicolas Cage and Faye Dunaway.

In addition to her extensive acting credentials, Nicky is also a highly sought after model, and was the face of the CrownBet (now BetEasy) campaign which was launched in AFL Grand Final Week 2017. The CrownBet campaign is not the only high profile campaign Nicky has been involved with. Nicky was hand picked as the face of Nespresso internationally where she appeared in the Nespresso ads globally alongside international Hollywood stars George Clooney and Jack Black. 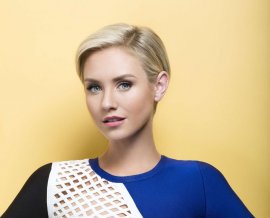