Starring roles in both international and Australian hit television shows

Best known in Australia for her role in Network Ten’s show Neighbours, Kimberley Davies has had starring roles in both international and Australian hit television shows.

Kimberley landed her very first acting role in 1993 as Annalise Hartman in Neighbours, a role she played for three years. Kimberley subsequently made the move to Los Angeles where in no time landed a lead role in the series ‘Pacific Pallisades’, alongside Joan Collins as her on-screen mother. During Kimberley’s time in the US, she also guest starred in major world-wide hit television shows including Spin City, Friends and Ally McBeal.

On the silver screen, Kimberley has played the lead role in The Shrink is In, The Psycho Beach, Spy and True Love and Chaos.

Due to her popularity, Kimberley over the years has accepted many celebrity appearance roles in shows such as UK’s ‘I’m a Celebrity Get Me Out of Here’ in 2006 and the Nine Network’s ‘Celebrity Circus’. Since relocating back to Australia from the US in 2005, Kimberley also was a contestant on the Seven Network’s ‘Dancing with the Stars’ and more recently in 2011 as guest panellist on ‘Talkin Bout Your Generation’ on the Ten Network.

Kimberley’s success can be measured by the calibre of award events she has been asked to present over the life span of her career, namely being at the British Television Awards, The People’s Choice Awards, The AFI Awards and The Logies.

Kimberley has completed a Dramatic Course at Monash University and has also trained with some of the best teachers in the industry including Janet Alhunty, Ivana Chubbuck and Lesly Kahn.

Along with Acting, Kimberley’s other passion is interior design which she is studying in her third year at RMIT University, whilst also a mother to three young children. 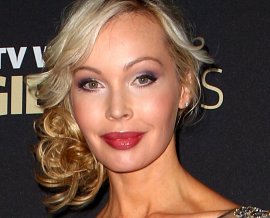