One of Australia's most beloved radio and television presenters

As one of Australia’s most beloved radio and television presenters, Fifi Box is a well-known personality who can present at any event to a range of audiences. Her energetic and enthusiastic personality captivates audiences and leaves them feeling entertained.

Before becoming one half of Fifi and Jules as featured on the national FM radio network, Fifi appeared across television sets nation-wide. She worked on Channel Seven’s Sunrise as both the weather presenter and entertainment reporter. During her roles at Sunrise, Fifi interviewed several celebrities including Russell Brand, Tina Fey, Denzel Washington, Robert Downey-Junior and many more. Her down-to-earth personality and previous experience in radio made her comfortable in front of the camera and a favourite with viewers. In 2007, she joined Seven’s Dancing with the Stars where she placed second.

As well as featuring on Sunrise and hosting The Morning Show, Box was also a regular guest on Thank God You’re Here, where her quick thinking and witty skills amused both viewers and the other comedians.

Having working in the radio industry for over a decade, Fifi knows how important hard-work can be to bring success to both the company and the individual. She has covered all bases at the radio station, having hosted shows and been a radio producer. Fifi is also a published writer, and has written about her struggles and triumphs in her own life in a weekly opinion column within News Limited’s Sunday magazine.

In April 2013, Fifi’s life changed for the better when she gave birth to a baby girl, naming her Beatrix Belle or Trixie Bell for short. She had been sharing her pregnancy experiences with listeners and viewers and was overwhelmed with congratulations. She also won the admiration of many women across the nation as the new mother was featured on the cover of a weekly women’s magazine without any make-up.

Fifi Box is willing to speak at any event or conference, entertaining and amusing audience members. Her open personality connects well with audience members and she works to demonstrate how funny life can be at times. 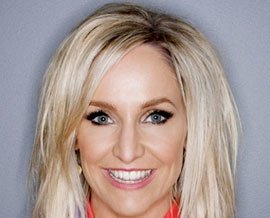