David Campbell is a renowned performer, presenter, MC/Host and Artistic Director.  David has hosted events and played the role of MC for numerous corporate organisations and recently released his latest album Lets Go.

One of Australia’s most popular entertainers, David has featured on TV, starred in theatre and cabaret, recorded three Top Ten albums, and sold out concert tours from coast to coast. He has a unique legacy as not just one of Australia’s leading musical theatre stars, but also one of the few local performers to have achieved similar success in New York.

He recently returned from the USA where he was once again a headlining artist at G’Day LA and then MC and headliner at G’Day NY.

Born and raised in Adelaide, David was drawn to the performing arts – initially as an actor. He was performing at the Sydney Opera House by 22, and in 1997 starred in Les Miserables in Sydney. Shortly after, Campbell moved to New York, where his downtown cabaret show attracted major crowds. Time Out New York described David as “the biggest buzz since Barbra Streisand”, and he moved his show to the iconic cabaret room Rainbow & Stars, becoming the youngest performer ever to headline the venue.  Campbell was soon in demand from Broadway’s most prestigious writers and directors.  Stephen Sondheim cast him in the New York premiere of his musical Saturday Night, and he played leading roles in shows like Babes In Arms (at the Lincoln Center), and South Pacific.

In 2001 Campbell was tempted back to Australia by the role of a lifetime – ‘the wild one’ Johnny O’Keefe, in the musical phenomenon Shout! He toured Australia in the show for over a year, and became a household name as a result. Campbell went on to star in Australian productions of classic musicals like Carousel and Company, and in Pirates of Penzance for Opera Australia. Along the way, he picked up a Helpmann Award for Best Actor, for his 2005 role in Sunset Boulevard. 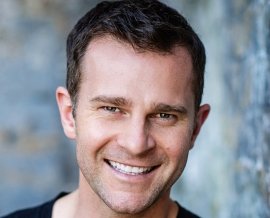