From footballer to family business manager

Playing football for two teams in New South Wales, Sean Garlick was commended for his consistent performance and dedication. His skills as a footballer equipped him with the skills to create, build and manage a successful family business.

Retiring at the end of the 1999 season after playing for both the Rabbitohs and the Roosters, Sean remained a constant presence in the media circuit, commentating for The Footy Show.

In 2000, Sean, his brother Nathan and father Terry decided to open a pie shop. Nathan, a trained pastry cook, sick of working for wages in a local pie shop, and both Terry and Sean looking for something to keep them occupied.  Sean utilised his skills in both football and his previous acting experience to give him the confidence needed to make the giant leap into the business world.

Fortunately, the family owned and operated business was successful.

To help catapult the family business, Sean contacted The Footy Show who agreed to televise the opening of the store via a live pie eating competition. This brought tremendous success to the small business and a year later, when another store was opening, the show broadcast live again.

But Sean discovered that the business side of things weren’t always as easy as it seemed. Having to look for a balance as some stores experienced substantially more success than others, this unbalanced the overall economics.  Discovering the central bakery was making them the most profit, Sean realised some changes had to be made. Hiring suitable employees also proved to be challenging as their stores where scattered throughout Sydney but Sean is determined to become an employer of choice and increase staff retention.

To reconcile the issues, the company began to look into wholesaling their pies worldwide which led them to striking up a deal with Coles and forging an excellent business relationship.  Getting the product into McDonalds happened by sheer chance.  Sean was on a long haul flight from L.A. and was seated next to the NSW and ACT State Manager of McDonalds.  The manager recognised Sean from his former football life and after striking up a conversation, they hatched a plan over a long flight and a few beers.  A six month trial ensued.  The concept of using a fully cooked filling combined with raw pastry allows the pies to be cooked fresh in each store.  Garlo’s Pie Shop has also expanded globally with the opening of two stores in Los Angeles alongside the wholesale distribution to Asia, the South Pacific, New Zealand and parts of the Middle East.

During his time spent growing a business from the bottom up, Sean Garlick learnt that success can be created and that it takes time to build a business. He is able to speak to any audience about the importance of keeping business plans flexible and having a mind that is open to change and react quickly. He stresses the importance of recognising capability and the importance of not over exerting the business. 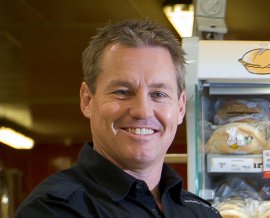