Boasting a professional speaking career spanning over thirty years which has been filled with various awards and recognition, Glenn Capelli is one of Australia’s top motivational speakers. He is a professional educator who is passionate about dynamic thinking, innovation, creativity and smarter leadership.

Glenn is a National Speakers Association Certifies Speaking Professional and is the only professional speaker within the nation to have won all three major speaking awards including Educator of the Year, the Nevin Prize and the prestigious Sir Winston Churchill Fellowship.

Aside from being a prestigious speaker, he is also an author, songwriter, radio and television presenter.

He wrote, produced and presented ‘Born to Learn’, an award-winning television series that aired weekly throughout the United States.

Glenn’s book ‘Thinking Caps’ is what many individuals recognise him from. The book features inspiring, amusing and moving stories about life. He has also co-authored the textbooks ‘Maximising Your Learning Potential’ and ‘The Thinking Learning Classroom’, utilised by teachers and trainers. He has also written ‘Philosophically Speaking’, a handbook for professional speakers and educators.

‘Thinking Caps’ is now a weekly radio program on Radio 3AW with Denis Walter and has become one of the stations most popular and highly rated segments.

Glenn has written and produced more than fifty songs, two of which have been featured in the Australian Broadcasting Commissions’ Songbook which is distributed to primary schools across Australia.

He is also the creator and presenter of the Dynamic Leadership Thinking Program. The program has been implemented by some of the largest companies across the nation including Ernst & Young, St George Bank, Defense Material Australia and CLSA.

Glenn Capelli is an inspirational and uplifting speaker with an aim to introduce innovative ways of thinking to a business. His impressive ideas and strategies have been heard in over twenty-six countries and is sure to impress any audience. Glenn equips audience members with the essential tools to cope with everchanging surroundings. 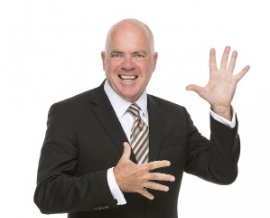