One of Australia's most outstanding retailers and business leaders

Over the last 30 years Bernie Brookes has been regarded as one of Australia's most outstanding retailers and business leaders.   Recently retired CEO of Myer, Bernie was previously a Managing Director of Woolworths and inducted into the Australian Retail Hall of Fame in 2013.

His experiences have seen him undertake various roles around the world, including in China and India.  Bernie was appointed as CEO and MD of Myer in 2006 and responsible for managing the carve out of Myer from Coles Group and the rebuilding of the Myer business which he successfully did.

Bernie was appointed Chief Executive Officer and Managing Director of Myer in June 2006 and has been a member of the Board since July 2006.

Since his appointment, Bernie has been responsible for the turnaround and rebuilding of the Myer business including the development and implementation of the Myer five-point strategic plan to ensure the business is well-positioned for the challenges facing the retail industry.

Bernie has more than 36 years of retail industry experience. He has undertaken roles in India and China and has held numerous executive roles including at Woolworths where he was instrumental in Woolworths’ Project Refresh, reducing costs by more than $5 billion over five years.

Bernie’s commitment to retail in Australia has been recognised with awards including the Sir Charles McGrath award for marketing excellence and his induction into the Australian Retailers Association Hall of Fame in 2013.

Bernie has also been the recipient of the William Booth Medal by The Salvation Army and the Paul Harris Fellow for Service to the Community for the Rotary Club, Sydney. 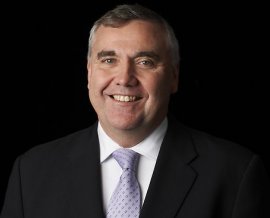