An independent policy advisor who is passionate about enhancing countries

Simon Anholt is an independent policy advisor who works with the Heads of State, Heads of Government and administrations of nations, cities and regions worldwide to develop and implement strategies for enhanced economic, political and cultural engagement with other countries.

He was a member of the UK Foreign Office's Public Diplomacy Board between 2000 and 2009, and has advised the Heads of State, Heads of Government and cabinets of more than 40 other countries including Chile, Croatia, Finland, Latvia, Australia, the Netherlands, Norway, Romania, the Faroe Islands, Jamaica, South Korea, Poland, Scotland, Tanzania, Sierra Leone, Sweden, Iceland, Botswana, Germany, the Baltic Sea Region, Bhutan, Mexico, Ecuador, New Zealand, Switzerland and Slovenia, as well as numerous cities and regions.

Simon devised the concept of nation brand in 1996 and today continues to lead the highly acclaimed Nation Branding Masterclass series, supported by BBC Worldwide, in London, Dubai, Singapore, Delhi and Accra. He is the founder and publisher of the annual Anholt Nation Brands Index, Anholt City Brands Index and Anholt State Brands Index, three major surveys which use a panel of over 20,000 people in 25 countries to monitor global perceptions of 50 countries, 50 cities and the 52 States of the Union.

He is the author of the best-selling book, Another One Bites The Grass, and Editor of the quarterly journal, Place Branding and Public Diplomacy. His book on the role of brands in economic development, Brand New Justice, was first published in 2003. He is a co-author of Beyond Branding (Kogan Page 2003), Brands and Branding (The Economist 2003), Heritage and Identity Shaping the Nations of the North (Donhead 2002) and Destination Marketing (Butterworth Heinemann 2001/2003/2009). His more recent books are Brand America, (Cyan Books 2004 and 2009); Competitive Identity: the New Brand Management for Nations, Cities and Regions, (Palgrave Macmillan 2007); and Places: Image, Identity and Reputation (Palgrave Macmillan 2010).
Simon is a Parliamentarian of the European Cultural Parliament. He was awarded the Nobels Colloquia Prize for Economics in Trieste in 2009 and the Prix d'Excellence du Forum Multiculturel pour un Développement Durable (Award for Excellence in Sustainable Development), at the 7th Multicultural Forum at the Palais de la Découverte, Paris, in 2010.

Aid and Development
Climate Change and Public Opinion
Creativity and Innovation, Entrepreneurship and Leadership
Education and How The Future Of The World Hangs On It
Globalisation
Governmental Social Responsibility
International Relations
Resolving Discord Between Powers and Religions and Cultures, and Consequently Counter-Terrorism and
The Changing Picture of Economic, Cultural, Social, Political and Military Power
The Future of Diplomacy
The Future Role of Your Specific Country in the World
The Role of Business in Global Governance
The Role of Culture (In the Sense of Expressive Arts) and Culture (In the Anthropological Sense) In 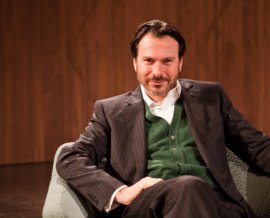