An amazing magician, mentalist and comedy hypnotist guaranteed to impress

An amazing magician, mentalist and comedy hypnotist who brings new appeal, creativity, and a youthful approach to the art of entertainment is how Mike Tyler has been described. He blends illusion, personality, humour and sleight-of-hand skill to create a unique and memorable experience for his audience.

He’s performed across the globe for some of the world’s most successful companies, professional sporting teams, government organisations, and charities and hosts a regular magic segment on Network Ten’s ToastedTV.

In 2014 Mike headlined the Brisbane Comedy Festival at The Powerhouse with a week of sold-out shows. Mike then toured Australia performing back-to-back shows to sold-out audiences. He also performed on Channel Ten's "The Project" and "Wake Up" as well as Channel Nine's 2014 "Children's Hospital Fundraiser Telethon" which help raise $9.2 Million.

Mike is guaranteed to impress!

Mike engages your guests up-close in a social setting with clean, hilarious, and amazing magic and mind trickery. This includes trickery with cards, balls, coins, fire, napkins, money, rings, and even borrowed items. Some of it is known to happen literally IN THE HANDS of the audience. Mike started his career as a close-up magician and is now considered one of Australia’s best.

A comedy magic show that combines mind-blowing magic, cutting-edge mind trickery, and side-splitting comedy. Mike’s informal show is clean, hilarious, interactive, and memorable making it the topic of conversation long after the event. It’s different to some magic shows as Mike removes any “cheesiness” associated with classic magic and includes the use of psychology, predictions, and mind-reading that will have guests in awe. A guaranteed crowd pleaser!”

Mike adds youth and flair to the ancient art of hypnosis as his show encourages members of the audience to become the true stars of the stage: saying and doing things they would never otherwise do. It’s all REAL and must be seen to be believed! The minimum show length is 60 minutes and ideal for audiences of over 100 people who are interested in an unbelievable, hilarious and unforgettable night!

Mike was brilliant. He has a wicked sense of humour

Mike was flawless in his delivery… captivating, hilarious, entertaining

An incredible magician and hypnotist 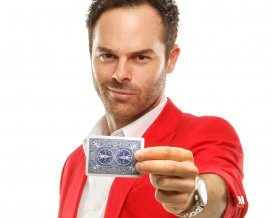