Over 850 performances as Frankie Valli in Jersey Boys helped Bobby Fox create an incredible fan base.  Further appearances in musical theatre and on-screen has solidified Fox’s role as a great entertainer.

Bobby, an Irish born Australian, toured with Riverdance and won an impressive four World Irish Dance Champions. His theatre and dance events have included ‘Hot Shoe Shuffle’, ‘Mamma Mia’, ‘We Will Rock You’, ‘Ladies in Black’ and ‘Saturday Night Fever’.

Accolades include a Green Room Award for ‘Ladies in Black’ and a Helpmann Award nomination for ‘Assassins’.

On-screen work has included ‘House Husbands’, ‘Upper Middle Bogans’, ‘Tricky Business’ and an appearance in the feature film ‘The Cup’.

Bobby Fox is one of Australia’s most in-demand entertainers. 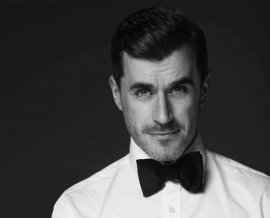