PAULINI has been heralded as one of the finest vocalists and performers to come out of Australia. This Fijian born songstress rose to fame through television screens on the very first season of Australian Idol in 2003 and thrust into the spotlight as the competition reached a fever like pitch. Making it through to the final four, she won the hearts of a nation with her angelic, five octave range, and engaging personality.

As an artist PAULINI rose to prominence on the top of the Australian ARIA Charts in 2004 with her debut Platinum album 'One Determined Heart' and her Platinum smash single 'Angel Eyes', both hitting the #1 spot and receiving Aria Number 1 Chart Awards ('Angel Eyes' remained at the top of the charts for 6 consecutive weeks). In fact, PAULINI is still 1 of only 10 Australian female solo artists to have a #1 album debut on the Australian ARIA Charts.

More recently PAULINI has grown as a performer, a songwriter and as an actor, steering her own destiny in her music career and making choices that she truly feels great about. In 2017 PAULINI debuted her acting skills when she landed and played the lead role as Rachel Marron in the The Bodyguard Musical which then lead her to becoming a lead vocalist in the Saturday Night Fever Musical followed by her 2019 lead acting role as Dionne in the 50th Anniversary of Hair the Musical.

Most recently though you likely saw PAULINI unveiled as the SPIDER on the first season of The Masked Singer Australia. PAULINI continues to spend time in the studio and is just about ready to release new music. 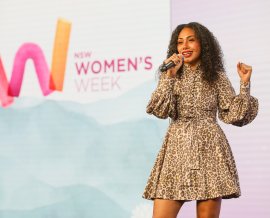