Larger than life Pip, co-founder and creative director of P.E Nation, began on her path to success after completing her Bachelor of Commerce/Law. She launched her career in Global Risk management at a well-known international firm, PWC, in Sydney, before shunning the corporate world for fashion.

Pip undertook the role of PR Manager, then Womenswear Designer at Sydney label Ksubi. From there, she hit her stride and went on to join the incredibly successful team at sass & bide as their Senior Creative & Accessories Designer.

Following this, Pip was appointed Design Director at General Pants, a position she held for three years prior to her launching P.E Nation in 2016.

Pip is the ‘face’ of P.E Nation, using her initials as company branding and her lifestyle reflects what they stand for. She is across every aspect of the business including financials, creative, production, sales and marketing.

Pip says, “understanding every department is integral to the continual growth and success, so every decision is one in which I am involved in making”.

In March 2016, P.E Nation’s first collection sold out within hours on its website. Since then, the street-meets-sportswear has expanded to include technical activewear, retro-inspired streetwear, footwear and accessories.

Pip is a wholly passionate individual who loves what she does and actively seeks to change lives on a daily basis. Whether her customers are dropping their kids at school, working out, eating out or heading to work, Pip aims to create something that can be worn across all scenarios. P.E Nation has created buzz and excitement in the world of activewear but more than that, as a business, they aim to help shape lives. P.E Nation encourages activity in order to decrease stress and to increase energy levels. Pip and her team have created a supportive and inspiring community, a ‘nation’ who all want to look good, feel good and be inspired to do it all, and take on life. 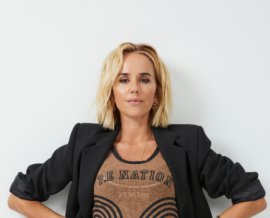