A best-selling author and award-winning businesswoman

Pauline Nguyen is a best-selling author and award-winning businesswoman – and her achievements are all the more impressive for her having escaped Vietnam on a boat and survived a Thai refugee camp. She has overcome these adverse beginnings to transform her approach to success by re-engineering her beliefs, questioning the status quo and hacking cultural norms to become one of Australia’s most successful entrepreneurs.

As the owner of Red Lantern the most awarded Vietnamese restaurant in the world, in 2012 Pauline won the Australian Telstra Business Award for Medium Business. However, that is only the tip of the iceberg when it comes to Pauline’s achievements; her memoir, Secrets of the Red Lantern, has been critically acclaimed around the world and appeared in numerous bestseller lists. She holds a BA in Communications from the University of Technology, Sydney, and in 2008 won Newcomer Writer of the Year at the Australian Book Industry Awards.

Pauline has achieved outstanding success as an entrepreneur, author, businesswoman and acclaimed speaker with the unique ability to connect with her audience in a profound way, empowering them to change their story for a better future.

Pauline is an original ‘Rare Bird’ – one of Australia’s top 50 influential female entrepreneurs – and is included in Blackwell and Hobday’s global recognition of 200 Women Who Will Change the Way You See the World.

She has a high-performing Western business background combined with an Eastern slant of spirituality - and her unique philosophy is taught with warmth and humour, telling her own story of what can be achieved through key alignment of thoughts and intentions.

Calm Courage, Resounding Resilience, Tacit Grit
Navigating through change and disruption. As a thought leader, Pauline’s unique life experiences have given her a distinctive insight into the minds of individuals and businesses alike, allowing her to pass on the invaluable skills of self-mastery, courage, resilience, and grit. When Pauline talks of commitment driving outcomes, people listen.
The Game of Business Mastery is the Game of Mastering Influence
Named as one of ‘Australia’s Top 50 Influential Female Entrepreneurs’, and one of the hand-selected ’200 Women Who Will Change the Way You See the World’, Pauline understands how to use the Weapons of Influence in business and in life. Her day-to-day professional life was in orbit around her life principles, and not the other way around. This self-actualisation has carried her to prosperity while running the awarded restaurant Red Lantern, (the most awarded Vietnamese restaurant in the world) and authoring bestseller, Secrets of the Red Lantern, (Winner Debut Writer of the Year).
The Red Lantern Story: From extreme adversity to success
Having escaped Vietnam on a boat and survived a Thai refugee camp, Pauline Nguyen has learned to reframe the events of her tumultuous childhood and often describes her upbringing as her ‘training’ to become a master of her thoughts, behaviours and emotions - learning to approach everything with an unshakable spirit to become the owner of the most awarded Vietnamese restaurant in the world, Red Lantern.
The Way of The Spiritual Entrepreneur
Discover the 7 Secrets to Becoming Fearless, Stress-Free and Unshakable in Business and in Life. This keynote is a no bones, honest and forthright methodology of business, life and spiritual practice designed to disrupt standard ways of thinking, bringing the unconscious into the conscious and catapulting the audience into an optimistic mindset of abundance and possibility. Any person or organisation who follows The Way of The Spiritual Entrepreneur is destined to have a competitive advantage in business and in life.

Pauline’s story of inspiration and honesty was one of the most impressive presentations I have ever seen. Pauline’s impeccable delivery with lessons from both a personal and business perspective were on-point and whole-heartedly engaging - and kept the entire audience engaged and wanting to hear more.

Pauline captured the attention and hearts of everybody in the room as she told her story of her life - one of the best professional speakers I have seen.

Pauline combines an honesty and vulnerability with a confidence that is engaging to listen to. The audience was captivated. Without a doubt one of the best speakers I’ve had the pleasure to listen to. 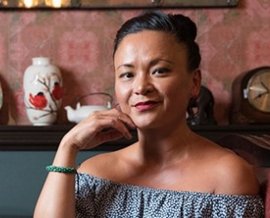