Hear from a thought-leader in entrepreneurship

Lorraine Murphy is Founder and Head of Relationships at The Remarkables Group - the first dedicated influencer talent agency in Australia, which launched in May 2012 and now represents 22 leading influencers.

Between them, Lorraine and The Remarkables Group have received several plaudits including being named as one of BRW’s Fast Starters, Emerging Agency of the Year, Australian Start-up of the Year and Women in Media – as well as being finalists for the Telstra Business Awards, Women’s Agenda Women in Leadership Awards and the Mumbrella Awards.

Lorraine was named one of BRW’s Five Young Entrepreneurs to Watch and one of Dynamic Business’s Young Guns.  She has featured frequently in media, including The Project, Sunrise, Sydney Morning Herald, Marie Claire, Sky News and The Australian.

Prior to starting The Remarkables Group, Lorraine created and managed campaigns in an eight-year career that began in Dublin, moved to London and ended up in Sydney.

Lorraine recognised a need for a coordinator of influencer and brand relationships in the Australian market and brings her background in PR, digital and communications strategy to assist brands in reaching their target audience by partnering with some of Australia’s most influential bloggers.

Lorraine is an avid trend-watcher and participant in social media who lectures in the strategic use of social media at both the University of New South Wales and Sydney University.

Lorraine is a thoughtleader in entrepreneurship; having spoken to over 3,000 up-and-coming entrepreneurs on three speaking tours with entrepreneur organisation The Entourage.  She has also spoken at industry events including Mumbrella’s CommsCon, Business Chicks, BeFest, IAA, Social Media Week and Problogger Training Event.

She leads training seminars for both bloggers and brands (including Telstra, L’Oreal, Nestle, Flight Centre and Woolworths) as part of her mission to get influencer partnerships right. 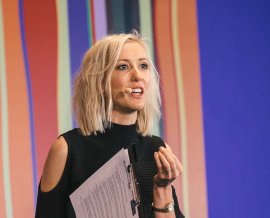