Larger than life character was an exceptional athlete

Wendell Sailor has been described as one of the most charismatic personalities in Australian sport. This larger than life character was an exceptional athlete who achieved and excelled in both Rugby League and Rugby Union.

A powerfully built winger, Wendell spent nine years with the Brisbane Broncos, scoring 126 tries in 209 games. He represented Queensland in State of Origin 17 times and played for Australia in 21 matches. He was formally recognized by the Broncos in 2007 as one of the best 20 players in the 20 year history of the club.

In 2001, Wendell made the switch to rugby union in a media storm that divided opinions. He proved a valuable acquisition for the Queensland Reds and it wouldn’t be long before he was selected to play for the Australian Wallabies. He would score the first try in the 2003 World Cup and play in the heartbreaking final.

Wendell returned to rugby league in 2009, playing for the St George-Illawara Dragons and helping them to the minor premiership before retiring. Wendell is an incredibly entertaining speaker who has an uncanny ability to connect with audiences.

A charismatic sportsman and an articulate speaker, Wendell Sailor inspires and entertains audiences with anecdotes of the challenges he has overcome and his unique playing experiences. A natural public speaker, he has commentated NRL games for television and regularly speaks at charity and community occasions as well as corporate seminars, product launches and awards events. 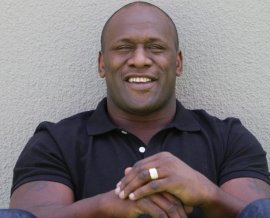