Australian tennis great Todd Woodbridge is one of this country’s most celebrated sporting legends. His talent and dedication have earned him the sports highest accolades including 7 Wimbledon championships; his 2000 French Open doubles win with partner Mark Woodforde sealing off his achievement for the most titles won in professional tennis. Off the court Todd has built a respected media and speaking career, travelling internationally for engagements and appearing on local television.

From the age of five, Todd Woodbridge has wanted nothing more than to be a professional tennis player. With dreams of competing at Wimbledon and playing Davis Cup for Australia firmly etched in his mind, Todd set out to achieve his dreams.
In singles, Todd has achieved enormous success. With the highlights being a semi- final appearance at Wimbledon in 1997. A world ranking high of 19, and a win at the Australian Men's Hardcourt Championships in Adelaide, as well as a winning record in singles for Australia in Davis Cup play over a ten year period.

Combining with Mark Woodforde in doubles, Todd formed the most successful team in tennis history. The Woodies, as they are affectionately known throughout the world, have become modern day legends. In not only tennis, but Australian sport in general!

They hold the record for the most titles won in Professional Tennis, an achievement they secured in June 2000 by winning The French Open ... the only Grand Slam title missing from their impressive list of titles. The Woodies have won over 60 titles, Three titles more than equal 2nd placed John McEnroe & Peter Fleming and Bob Hewitt & Frew McMillan. These teams dominated doubles tennis in the mid 60's and mid 80's.

The highlight of their doubles career together has been winning Gold in the Mens' Doubles series at the 1996 Atlanta Olympic Games. This win further established their legendary position in Australian Sport. At the 2000 Olympic Games they defended their position reaching the semi finals and securing Silver medals.

Following his win at the Atlanta Games, Todd was awarded the Order of Australia Medal in recognition of his achievements and commitment to tennis.

When his partner, Mark Woodforde announced his retirement from tennis, Todd teamed up with Jonas Bjorkman, going onto win the 2001 Australian Open together, followed by his seventh win at Wimbledon in July 2002.

Todd Woodbridge has developed into a much sort after speaker and presenter. He has been engaged by major corporations on many occasions around the world and enjoys this side of his career, along with TV work. 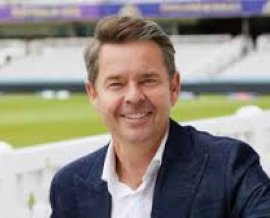