Tim Watson is one of AFL’s heroes, and having played for an extended period he is considered an expert in the sport. He is an inspirational individual whose background can be related to any type of audience.

In 1994, Watson joined the media side of the sport, and has been involved in everything from commentating to presenting, across multiple channels and stations. He is currently Seven News’ Sports Presenter, as well as a Special Comments Commentator and is a co-host of SEN 1116’s morning breakfast show ‘Morning Glory’.

Deciding to leave the media and return to coaching, in October 1998, Tim became the high-profile coach of the St Kilda Saints. After two seasons, Tim chose to return to the media.

As well as being a major sports commentator, Tim has also co-hosted ‘The Game’ and produced/co-created the reality TV footy show ‘The Club’ on Channel Seven. He has authored several books including a biography on Kevin Sheedy titled ‘The Jigsaw Man’ and a biography on Malcolm Blight titled ‘Malcom Blight – A Life in Football’.

With a background across sport and media, Tim Watson’s extensive credentials are sure to engage and inspire any audience. He can speak as an MC, public speaker or keynote presenter and uses his background to entertain every individual in the room. 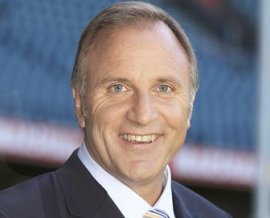