Little did Irish midfielder Terry McFlynn realise when he decided to move to Australia in 2004 that his life was about to change forever. Terry wrote to all the A-league clubs asking for a trial and Sydney FC was the only club to reply. Terry paid his own airfare and accommodation for a two-week trial, at the end of which he was offered a contract. The rest is history.

Terry became a Sydney FC foundation player and is the only A-League player to have served just the one club since the inaugural 2005-06 season. Before finishing his career with the Sky Blues in April 2014 after nine seasons, four years as captain, Terry played a vital role as a dual championship winner in 2006 and 2010 and also helped to lead the club to the double premiership and championship in 2010. He played 160 A-League games for the Sky Blues - the most in the club's history.

Terry McFlynn is highly praised by his peers for his dedication, total professionalism and work ethic and is extremely well respected and liked. He is now justifiably in demand as a speaker on motivation, teambuilding, culture development, leadership and, of course, soccer.

Terry McFlynn was born in a small Catholic village in Northern Ireland during the volatile period known as 'the troubles' and only met his first Protestant when he joined a soccer team at the age of 13. Although he was the first in his village to play soccer, a brave move, his career soon took off and at the age of 15, he signed for English Premier League team QPR and moved to London. Moving from a small village was daunting, as was the roller-coaster journey to come, but he stayed with QPR for five seasons before being released, along with 19 other players, following the collapse of ITV digital. He then played for various teams until 2004, when he moved to Australia.

When he joined Sydney FC, Terry vowed that he would only leave the club when they no longer wanted him. When he decided to retire nine years later, he was the record appearance holder for the club.

As a measure of the respect in which Terry was held, on his retirement Sydney FC honoured his record-breaking allegiance to the club by retiring the number 15 shirt for the whole of the next season. It also dedicated the next Sky Blues home game against Perth Glory to him, with Terry and his family presented to the crowd with a guard of honour prior to kick off. A flag bearing his image and name was also unveiled in the Sydney FC Walk of Fame.

Such is Terry’s influence and impact on the club and players, he know heads the position of General Manager of Player Welfare – ensuring strong and growing relationships between the club, players, fans and the community.

Terry McFlynn commands the utmost respect of everyone he has ever worked and played with and, today, he does the same as a superb motivational and leadership speaker. 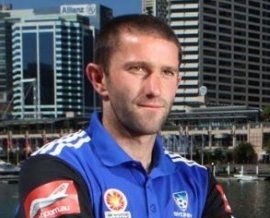