A marathon swimmer who has conquered the world's longest, deepest and coldest waterways

Marathon swimming champion Tammy van Wisse has conquered some of the world's longest, deepest and coldest waterways, clocking up an astonishing 65,000 kilometres, equivalent to more than one-and-a-half times around the planet.

The super fish has set six World Records; swum the English Channel twice (the success rate is only seven percent); is the only person to have swum Bass Strait; and spent three and a half months submerged in the mighty Murray River - just to mention a few of her milestones.

However, Tammy is more than an athlete - she is a dynamic achiever with a passion for success. She epitomises the attractive, outgoing and friendly personality of a healthy young Australian. Armed with the same energy and dedication as she puts into her incredible swimming career, Tammy brings a truly unique and inspiring presentation that entertains as it informs, and inspires as it motivates. Her infectious personality, beaming smile and well-modulated voice make her an excellent presenter, which is why she is very impressive as a keynote motivational speaker.

Tammy is also a passionate speaker on the environment and water quality issues, sharing her unique experience from the perspective of literally being immersed in the issues. Whilst working in her watery office, the Murray River, Tammy tried to raise awareness about environmental problems confronting the river such as poor environmental flows, salinity and toxic algal bloom. Her heroic three and a half month quest captured the imagination of the Australian public, subsequently generating over ten million dollars of publicity for the River Murray and resulting in Tammy becoming Australia's first Salinity & Water Quality Ambassador, a title bestowed by the Federal Environment Minister.

Tammy started her formal swimming training at age 11 after being overweight as a child. She progressed through her teens winning Victorian State Swimming and Victorian Royal Life Saving Titles.

She won the Lorne Pier to Pub swim, in 1986, 1987 and 1989.Her first marathon swim was in 1986 from Beaumaris to Frankston, a distance of twenty kilometres. In 1996, she became the first person to swim the treacherous Bass Strait.

On 18 February 2001, Tammy swam the entire length of the Murray River from the Alps to the ocean - a feat no one else in the world has achieved. Starting from Corryong in Victoria's high country, it took Tammy 106 days to reach the Murray Mouth in South Australia, a distance of 2438 kilometres.

Tammy continues to set her goals and work towards a sustainable future. She has been the Ambassador for National Water Week for seven years, recently appeared in Ian Thorpe's environmental documentary on FOX8 titled Fish Out of Water and recently completed building her own sustainable home complete with water tanks, solar hot water system and a worm farm! 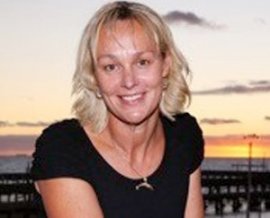