Stuart O’Grady OAM is a retired Australian professional road and track bicycle racer, who rode as a professional between 1995 and 2013.

A former two times World Champion on the track, O’Grady and Graeme Brown won a gold medal in the Men’s Madison at the 2004 Summer Olympics. He rode in 6 Olympic Games, from Barcelona in 1992 through until The London Games in 2012, winning four medals in total. O’Grady also won Paris–Roubaix in 2007. 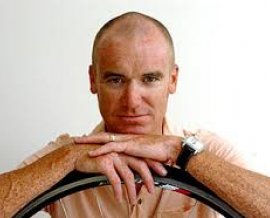