Pat Cash is a Wimbledon champion and 5 time Grand Slam finalist (singles and doubles). He has proudly represented Australia in the Davis Cup, twice winning the deciding singles rubber to defeat Sweden. To date Pat is the only player to have collected the junior, tour and legends Wimbledon titles and now plays on the ATP Champions Tour with other noted players such as Björn Borg, Boris Becker, Mats Wilander and Pete Sampras.

Following a string of injuries to his achilles tendon, knee and back, Pat retired from the professional tour. Since then, Pat has coached top 10 professional players such as Greg Rusedski and Mark Philippoussis. Recently, Pat has joined Tennis Australia as a national coach to help the next generation of Aussie tennis players. Pat is currently the host of Open Court, CNN's tennis-focused TV show. Pat also also works as a TV sports commentator for the BBC and Fox Sport.

Pat Cash is currently in the process of opening a string of new Pat Cash Tennis Academies in the Caribbean. Through these academies, Pat's tennis and biomechanics knowledge will help players at any level reach their tennis goals injury free.

Away from tennis, Pat is very passionate about charity work. He works closely with a variety of charities such as GOAL, a humanitarian organisation that deals with relief and development in third world countries. Orchid, which deals with the research and the spread of knowledge about men’s cancer. Also, he helped found Planet Ark in 1992, an Australian environmental organisation. 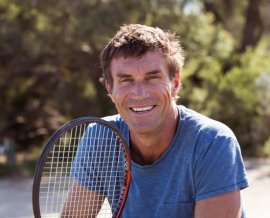