Brownlow and Norm Smith Medal winner; one of the AFL’s superstars

A sporting icon thanks to 15 years at the top of the AFL, Nathan Buckley’s career in football has come full circle with his return to Collingwood in a coaching capacity that saw him assume the role of senior coach in 2012.

Buckley spent two years without involvement at club level following his retirement at the end of 2007 after 280 games with Brisbane and Collingwood. Through 2008-09, Buckley was a regular presence in the media, working with Seven, 3AW and The Age as part of their football coverage. During this time, Buckley went through a thorough education as a coach to prepare himself for a full-time role within an AFL club.

The 2003 Brownlow Medallist was an Assistant Coach with the AIS-AFL Academy, playing a role in the development of two intakes of the elite junior program.

In 2009, Buckley was appointed coach of the Vic Country side for the NAB AFL Under 16 Championships. In an historic event held at the Blacktown site that will house the Greater Western Sydney AFL side, Buckley’s team went through undefeated and then claimed the Division 1 crown on AFL Grand Final Day.

Buckley committed to a five-year deal with Collingwood in July 2009. He will spend the first two seasons as an Assistant Coach under Mick Malthouse, taking charge of the forward line, before become Senior coach in 2012.

As a player, Buckley was recruited to Brisbane in 1993 from Port Adelaide in the SANFL, where Buckley had won the treble of Magarey, Jack Oatey and Premiership medals in 1992. Buckley won the first AFL Rising Star award in his sole year with the Bears then in 1994, fulfilled his dream of playing in the black and white of Collingwood, joining the club in a highly publicised trade. Buckley grew to become one of the AFL’s superstars. In a decade at the Magpies, Buckley won All Australian selection and the Copeland Trophy six times, a Norm Smith Medal, led the club to two Grand Finals and become the club’s longest serving captain.

In 2008 Buckley’s autobiography ‘All I Can Be’ was released by Penguin Books, with a hard copy and paperback version now available.  Originally from Alice Springs and later Adelaide, Buckley lives in Melbourne with wife Tania and sons. 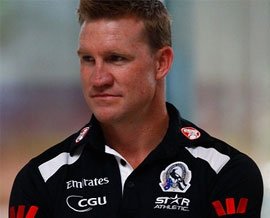